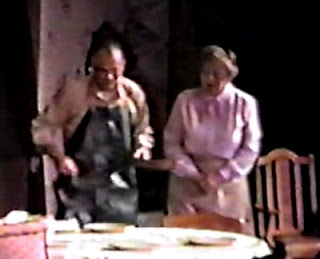 Larry G. Sutton and Adeline Knoy as
Paul & Penny Sycamore in You Can't Take It With You. Directed by Linda Gjesvold, Setember 9, 1987, performance.

Click HERE to see a program from this production.
Posted by Putnam County Playhouse at 5:57 PM 0 comments 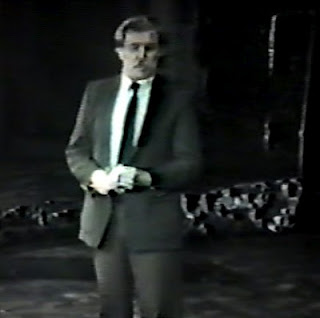 Dr. James Elrod, one of the founders of Putnam County Playhouse. Here he is onstage at the Grand Opening of the Hazel Day Longden Theatre on June 4, 1983.


Dr. Elrod talked to the invited audience about the early years of PCPH.


Click HERE to see a program from the Grand Opening.
Posted by Putnam County Playhouse at 3:39 AM 0 comments

We have a few video tapes of shows that were done during our first seasons in the barn. In this space each week we will show you a moment from one of these shows! Enjoy!! 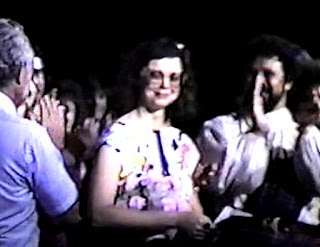 On July 16, 1988, on the closing night of Brigadoon, the Board of Directors and the cast applauded Ann Cooper [Swanson]. Ann [center] had served many years on the Board and had played in the pit for many shows in her nineteen years with PCPH. Ann had wanted to do Brigadoonfor many seasons. This was her last show with us [to date!] as she was moving to Missouri. Jim Poor [left] gave a short speech after the curtain call, and Ann was presented with a brass music stand, a bouquet of flowers, and our best wishes! Also pictured at right is cast member Steve Robles.

BRIGADOON - 1988 - Directed by Vickie Parker
Posted by Putnam County Playhouse at 3:27 AM 0 comments

The directors and audition dates for this season of Putnam County Playhouse have been selected.

Clue The Musical will be directed by Ric McFadden. It will be produced June 7-9 and June 13-16. Auditions will be Sunday, April 1, at 3 p.m. and again Monday, April 2, at 7 p.m. Both sessions will be in the rehearsal center at the Hazel Day Longden Theatre.

Director Jack Randall Earles will helm The Curious Savage. It will be presented July 12-14 and July 18-21. Auditions will be at the rehearsal center and will be held Sunday May 20, at 3 p.m. and again Monday, May 21, at 7 p.m. The Curious Savage is being sponsored by Rossok & Co. Insurance.

The season will close with See How They Run directed by Larry Sutton. Auditions at the rehearsal center will be Sunday, July 22 at 3 p.m. and Monday, July 23, at 7 p.m. The show will be produced September 13-15 & September 19-22.

More information about the shows and the directors notes will be posted soon!!!
Posted by Putnam County Playhouse at 3:14 AM 0 comments