T.J. Tincher won the Hammy Award for 2012 for his performances in Thoroughly Modern Millie, directed by Shelly McFadden. The Award was presented on October 21, at the annual meeting of the Putnam County Playhouse.  Other nominees were Peggy McClaine for See How They Run directed by Larry Sutton, Kathryn Dory for The Curious Savage directed by Jack Randall Earles, and Marilyn Burdsall in Clue: The Musical directed by Ric McFadden.

In addition the members of the board, those in attendance included Peggy McClaine, Steve McMains, and Eleanor Howard. Light refreshments were served, and everybody had a good time. 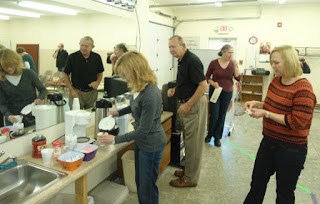 At the regular board meeting held immediately after the Annual Meeting, a slate of officers for 2012-13 was put into place.  They include President, Michael McClaine; 1st Vice President, Jack Randall Earles; 2nd Vice President, Linda Gjesvold; Secretary, Kathryn Dory; and Treasurer, Mark Hammer.

Also elected to the board to serve two year terms were T.J. Tincher, Dustin Bond, and Meghan Armitage.

Most people were pleased with the outcome of the day. The board looks forward to 2013!

Posted by Putnam County Playhouse at 11:09 AM 0 comments


The annual meeting of Putnam County Playhouse will be held on Sunday, October 21, at 4 p.m.  The event will be in the Rehearsal Center at the Hazel Day Longden Theatre.

All participants and persons interested in PCPH are invited to attend. Admission is free, and light refreshments will be served.

Committee chairpersons will present a report on their activity. Committees include Tickets, Promotions, Program, Finance, and others.

President Michael McClaine will also present his State of the Playhouse address.

Members of the board up for re-election will be nominated and voted on at this meeting as well.

A highlight of the meeting will be the presentation of the Upstage Award, also known as The Hammy.  For each mainstage production, the director nominates one person whose performance was most noticed by the audience or who - although had limited time onstage - made the most of that time.


FROM CLUE THE MUSICAL:

Posted by Putnam County Playhouse at 11:23 AM 0 comments