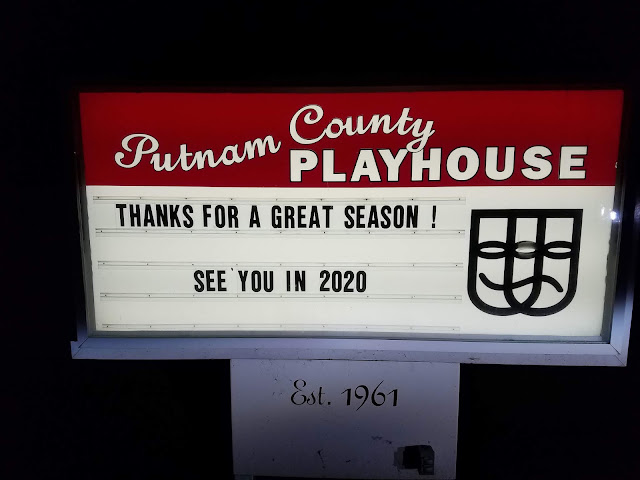 THANKS TO EVERYONE FOR YOUR
GREAT SUPPORT THIS SEASON.

WE APPRECIATE OUR AUDIENCES &
DONORS AND ALL OF OUR VOLUNTEER
DIRECTORS, ACTORS, MUSICIANS, AND
TECHNICIANS WHO MADE OUR 58TH
SEASON POSSIBLE.

Posted by Putnam County Playhouse at 10:31 AM 0 comments

PICNIC ENDED ITS RUN ON SEPTEMBER 21

WHAT'S HAPPENING IN THIS PICTURE?  SEE PICNIC AND FIND OUT THE ANSWER.


Posted by Putnam County Playhouse at 11:38 AM 0 comments

COME TO THE 'PICNIC'

Putnam County Playhouse ends its 58th season with a production of the Pulitzer Prize-winning play Picnic by William Inge. It will be presented September 12-14 and September 18-21. All performances are at 8 p.m. All tickets are $10 and can be reserved by calling the box office at 765-653-5880 from 5 p.m. to 7 p.m. Monday through Saturday.

The play is sponsored by:

Picnic is directed by Jack Randall Earles. Assistant director is Sandi Rossok and production stage manager is Brandon Wunderlich. This team was responsible for last season’s hit comedy Barefoot In The Park.

Jack Randall appeared earlier this season in Send Me No Flowers. Sandi has appeared onstage in Laughing Stock, Man of La Mancha, The Curious Savage, and On Borrowed Time. Brandon was also on the stage crew for She Loves Me in June.

When Hal Carter (Dylan Arnold) comes back to the small Kansas town he grew up in, he changes the lives of everyone around him. This includes Madge (Sarah Armitage), a local girl; her sister Millie (Hadley McCoy); their mother Flo (Caroline Good); and their neighbor Helen Potts (Tammy Hunter).

Dylan is making his PCPH Mainstage debut in this role. Sarah appeared last season in Barefoot In The Park and has also appeared in Guys & Dolls and Don’t Drink the Water among other productions at PCPH.  Hadley McCoy most recently appeared in Shrek! as Teen Fiona.

Caroline directed Annie last season and has appeared in leading roles in Blithe Spirit, Angel Street, and The Sound of Music at PCPH. Tammy most recently played Mrs. Banks in last season’s Barefoot in the Park.

Local schoolteacher, Rosemary (Shelly McFadden) takes the lead with her reluctant beau, Howard (Brad Sandy), and helps him decide what her future will be. Shelly directed She Loves Me to open the season and appeared in Shrek!  Brad appeared last season in Beauty & The Beast and has directed many shows at PCPH including Arsenic & Old Lace.

Lighting design is by Dustin Bond. Sound design is by Bond and Craig Armitage. Set design and painting is by Linda Gjesvold. Running the light board is Lisa McCoy. The sound board is run by Noah D. Pettit. Costumes are by McFadden and Good.

Picnic was last produced by PCPH in 1988 and was most recently revived on Broadway in 2013.

Posted by Putnam County Playhouse at 8:37 AM 0 comments 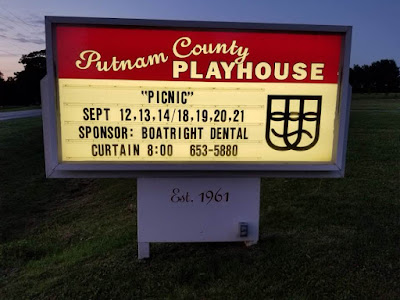 The final production of our season will be the Pulitzer Prize-winning play Picnic.

Rehearsals are underway! Please join us as we end our season.

The show is sponsored by:

Posted by Putnam County Playhouse at 10:09 AM 0 comments