THANKS TO ALL WHO AUDITIONED!
READ THE CAST LIST HERE.


Love Conquers All will continue in July at Putnam County Playhouse.  Send Me No Flowers will be presented July 11-13 & July 17-20.


The production is being sponsored by Shuee’s Great Buys Plus.

Those auditioning will asked to read from the script.

"Send Me no Flowers is a show about misunderstandings and the lengths that one man will go to for the woman he loves.  George Kimball is a hypochondriac with a problem, he thinks he’s dying.  When he overhears his doctor talking about another patient, he immediately assumes its about himself.

"He decides to become proactive in his 'last few weeks' and plans for the eventual life his wife will have to live without him.  He even goes so far as to find the perfect suitor for her after he’s gone.  With the help of his constantly buzzed neighbor, Arnold, George will realize all his worrying and pills won’t save him from the inevitable realization that he’s been living more than he ever has."

Stage Manager for the production is Mike Mitchell. Posted by Putnam County Playhouse at 11:41 AM 0 comments

Don't Miss a Show - Get a Season Ticket!

The Season Ticket Brochures for our 2019 program with the theme Love Conquers All have been mailed. If you are on our mailing list, you should receive yours soon. Please fill it out and return it as soon as possible.

Season ticket orders are filled in the order they are received. You can choose the series you like. Tickets are $35 each and guarantee you the SAME seat for each performance on our Mainstage. 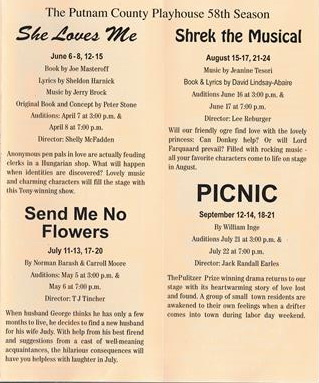 Our season this year will open with the musical She Loves Me in June. It will be followed by the comedy Send Me No Flowers in July. The rollicking musical Shrek hits the stage in August. The season closes with the Pulitzer Prize Winning play Picnic.

Individual tickets are not available until the day of the Open House on June 2, at 2 p.m. Do not use this form to order single tickets.

If you don't receive your brochure, or if you are not on our mailing list, you can print a Season Ticket Order form on our Box Office Page HERE.

Posted by Putnam County Playhouse at 11:10 AM 0 comments

"SHE LOVES ME" CAST ANNOUNCED!!! 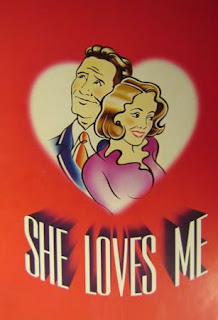 Director Shelly McFadden has announced her cast for the season opener She Loves Me. "Thanks to everyone who auditioned," said Shelly. "I appreciate your time and effort!"

The show is sponsored by:

THEATRE IS ON FOR THE WEEKEND!

The beginning of the season for Putnam County Playhouse is still a few weeks away.  If you can't wait to see a show, there are two offerings in the area this weekend you might consider.

PCPH Vice-President Dustin is directing Suessical the Musical at North Putnam High School.  It will be presented April 12 & 13 at 7 p.m. and April 14 at 3 p.m. Tickets are available at the door! PCPH participant Grace Elmore is a featured player.

PCPH  Board Member Caroline Good is directing the classic play Trojan Women at DePauw University in the Moore Theatre. It will be presented at 7:30 p.m. on April 11, 12, 13, and April 14 at 1 p.m.   Featured in the production is PCPH actor/director Andrew Ranck (Rooster Hannigan from last season's Annie). Also featured are Sarah Ryan and daughter Catherine who were also in Annie. Go HERE for ticket and show information! 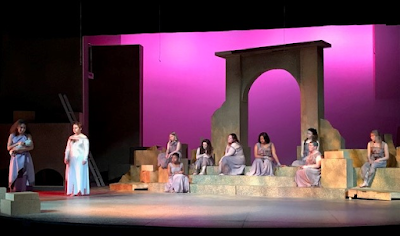 Posted by Putnam County Playhouse at 11:06 AM 0 comments