LET'S GO INTO THE WOODS!

INTO THE WOODS ENDED ITS RUN ON AUGUST 15!!

The third production of the 54th season of Putnam County Playhouse is the musical Into the Woods.  The Tony-Award winning show has music and lyrics by Stephen Sondheim and book by James Lapine.

Stage director and musical director is Lee Reberger. Pit conductor and pianist is Marilyn Burdsall Rush. She will be joined in the pit by Lynne Tweedie-Wurster on keyboard, Drew Brattain on bass guitar, and Michael McClaine playing percussion.

This is Lee's first directorial assignment at PCPH. For the last eight years, he has been president and principal director at Community Theatre of Clay County.

Linda is designing sets for all four productions this season. Shelly directed and costumed the first show of the season Seven Brides for Seven Brothers.

The musical is a combination of several fairy tales and what happens after “happily ever after.”

The musical originally opened on Broadway in November, 1987, and ran for 765 performances. It was nominated for ten Tony Awards and won three: Best Score (Sondheim), Best Book (Lapine), and Best Actress in a Musical (Joanna Gleason in the role of the Baker's Wife).

The original cast was reunited to tape the show for PBS in 1989.

An Into the Woods revival opened on Broadway in April, 2002, and ran for 279 performances. The cast was included Vanessa Williams as The Witch. It won Tony Awards as Best Revival of a Musical and Best Lighting Design.

A London production opened in 1990, and revival was presented there in 1998. The actress playing the Baker's Wife in both productions (Imelda Staunton, then Sophie Thompson) won the Oliver Award for Best Actress in a Musical.

The latest professional productions include an Off-Broadway version opening in January, 2015, and a production at the St. Louis MUNY that closed on July 28, 2015.

The PCPH cast is headed by Ric McFadden in the role of The Baker, and Kayla Myer playing his Wife. The Witch is played by Shelly McFadden. Other leading roles include Jack played by Cameron Callan, Jack’s Mother played by Kathi Elliott, Cinderella played by Meghan Armitage, and Andrew Ranck as the Narrator.

Elise Merrell is running the sound board, and Alex Briones is running the light board. Spotlight operators are Brandon and Cameron Wunderlich. Working on the stage crew are Rachel Lubinski and Aaron Swartz.


Our 2016 season lineup will be announced during the Curtain Speech at Into the Woods!

The 54th season concludes in September with a production Ken Ludwig's mystery-comedy The Game's Afoot: Or Holmes for the Holidays.


Posted by Putnam County Playhouse at 9:13 AM 0 comments 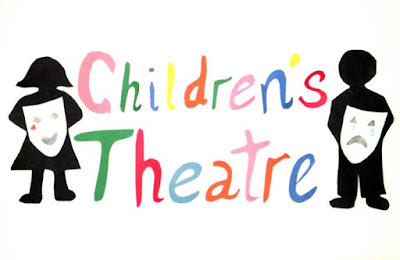 THE CHILDREN'S WORKSHOP HAS CONCLUDED!

The Children’s Theatre Workshop is happening this week at Putnam County Playhouse.  More than 30 participants are working on two original comedy plays about famous fairy tale characters.  Director of the program is Caroline Good.  Additional teachers for the workshop are Gigi Fenlon and T.J. Tincher. Assistant directors are Bethany Bax and Eleanor Howard, who are also working on costumes for the productions. 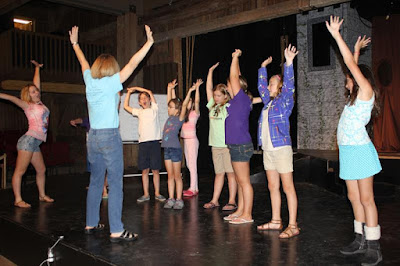 Two stories containing familiar fairy tale characters will be presented. One is titled “The Second Act” by Susanna Howard, who is also co-directing the play with Tincher. It explores what happens to the characters after “happily ever after.” The cast for this part of the program includes Marleah Muncie, Bella Green, Rebecca Hebb, Dunkin York, Harris Weltz, Chloe Gardner, Isaac Hertenstein, Noah Barnes, and Allie Purdue. 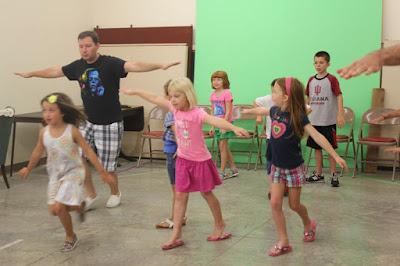 The other production is “Into the Forest” directed by Good and Fenlon. It is a mash-up of what happens when fairy tale characters from many stories meet each other in the woods.  This cast includes Savannah McCoy, Hadley McCoy, Maddie McCoy, Jocelyn Gardner, Paxton O’Brien, Avery Capps, and Evie Green. 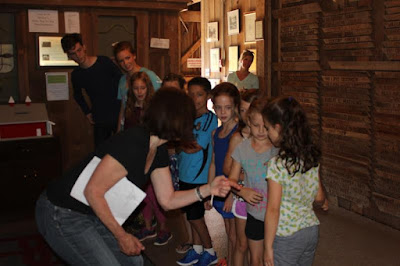 Both plays take place on the set of the upcoming PCPH production of Stephen Sondheim’s Into the Woods which opens August 6.

Interns working with the group are Abe Anglin, Chloe McGinity, Dylan Bodnarick, Libby Brush, Samantha Flannelly, and Bowie Foote.  Lauren Good is running the light board, and Cecily Girton is working the sound board. 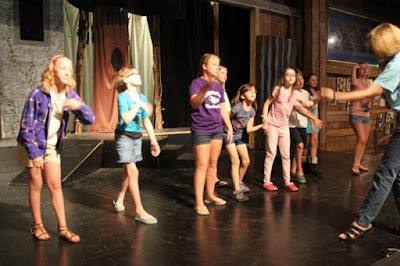 The mission of the Children’s Theatre Workshop is to bring to young people the love of theatre, providing them a venue to explore their creativity, and allowing them to collaborate and express themselves on stage.

Posted by Putnam County Playhouse at 10:25 AM 0 comments

CAST ANNOUNCEMENT FOR "THE GAME'S AFOOT" 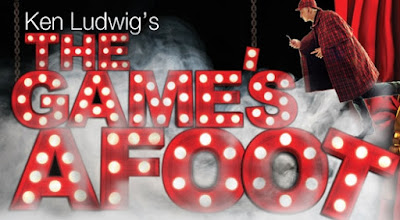 Director Dustin Bond has chosen his cast for the PCPH September production of the mystery-comedy The Game's Afoot.

A bickering married couple of performers, Madge and Felix, will be played by Tim Good and Caroline Good.

A younger couple, Aggie and Simon, will be played by T.J. Tincher and Anna Harris.

The cast is completed by Karen Temple as Daria Chase, a columnist with many enemies; and Madison King as a local police inspector caught up in the case....a case of murder....or is it?

The season continues in August with Into the Woods. 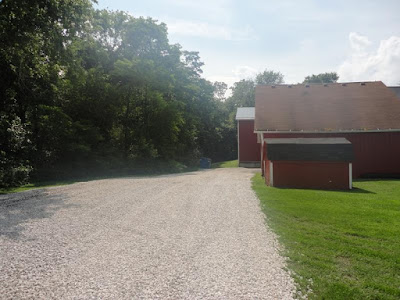 Gravel was recently added behind the small barn to make the parking area drier and safer for our casts and crews. We also plan to add more gravel to the audience parking area! 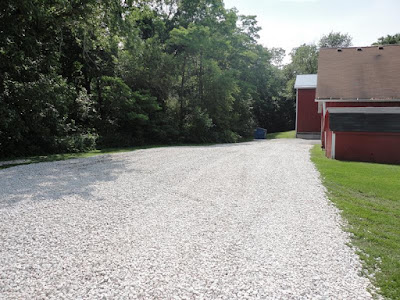 The new area was ready for closing night of The Bad Seed, and will first be used extensively by the cast and crew of the August musical Into The Woods!


Posted by Putnam County Playhouse at 11:09 AM 0 comments

THE BAD SEED ENDED ITS RUN
ON JULY 18

The 54th season of Putnam County Playhouse continues with a production of the thriller The Bad Seed. It will be presented July 9-11 and July 15-18. All performances begin at 8 p.m.

The Tony-Award-winning play by Maxwell Anderson was first presented on Broadway in 1954 and was filmed in 1956. It is a Putnam County Playhouse premiere. The film version received Academy Award nominations for Best Actress, Nancy Kelly (Christine Penmark) and Best Supporting Actress nominations for both Eileen Heckart (Mrs. Daigle) and Patty McCormack (Rhoda).

The Bad Seed is directed by Jack Randall Earles. Assistant director is Sandi Rossok. Lighting is by Dustin Bond and set design is by Linda Gjesvold. The technical crew includes Cecily Girton running the sound board and Cameron Wunderlich operating the light board.

Jack Randall directed and choreographed Guys & Dolls last season, with Sandi as his assistant. He also appeared in The Man Who Came to Dinner as Banjo, which won him his fourth Upstage Award. Jack Randall is a vice-president of the PCPH board and has appeared in such shows as The Drowsy Chaperone and Never Too Late. Sandi is also a board member and has appeared in many shows including Man of La Mancha and The Curious Savage.

Linda designs many of the sets at PCPH. She most recently worked on Seven Brides for Seven Brothers. Linda is also designing the set for the August production of Into the Woods. Dustin played Adam in last month's Seven Brides for Seven Brothers and will direct our final play this season, the mystery-comedy The Game's Afoot. Both are members of the PCPH board of directors.

The play was based on a best-selling novel by William March.

The mother of a nine-year-old girl is disturbed by her daughter's actions. When one of the daughter's classmates is drowned, the mother begins to wonder if things are as perfect as they seem. What influences a child's behavior most - environment or heredity? The answer as presented in The Bad Seed may not be current science, but it is still thought provoking.

Bethany Bax stars as Christine Penmark, a mother who makes a shocking discovery about her own life and how it affects her daughter Rhoda, played by Sonora Erwin. Christine begins to realize just who is responsible for a child’s death as secrets about her own past are revealed to her.

Bethany is a member of the PCPH board of directors. She has been in several plays here including You Can't Take It With You, The Glass Menagerie and I Remember Mama.  Bethany also directed Barefoot in the Park and The Nerd for PCPH.

Sonora appeared earlier this season in the ensemble of Seven Brides for Seven Brothers.

The helpful – at times – neighbors Monica and her brother Emory are played by Ashley Anne Vitz and Clarence Long.  Mr. and Mrs. Daigle, a pair of grieving parents are Allison Creekmore and Bob Jefferson.

Bob Jefferson appeared last season in The Man Who Came to Dinner. Allison Creekmore is making her PCPH debut in The Bad Seed.

Larry is a long time PCPH board member and has acted in and directed many shows. He played leading roles in The Fantasticks and All My Sons. Kathryn is the secretary of the PCPH board. She is returning to the stage after her role as Lily Belle in The Curious Savage.  Alan was seen at PCPH in Harvey. Dustin is making his PCPH debut in The Bad Seed.


TJ most recently appeared as one of the Pontipee brothers in Seven Brides for Seven Brothers. Brandon and Cameron worked on the same show as part of the crew. Cecily ran the sound board last season for Steel Magnolias.

The season continues in August with a production of Stephen Sondheim’s musical Into the Woods.