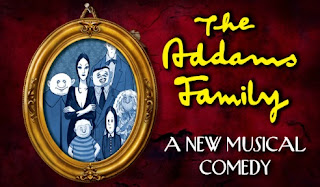 The third show of our "Season of Laughs" is the musical comedy The Addams Family. It will be produced August 10 – 12 and 16 – 19.    Director Ric McFadden will have two sessions of auditions for all roles in the show. The first session will be Sunday, June 4 at 3 p.m. to be followed by a second session on Monday, June 5, at 7 p.m. Both sessions will be held on the Main Stage at the Hazel Day Longden Theatre.

The characters are the same as you might remember: Gomez, Morticia, Wednesday, Pugsley, Lurch, Uncle Fester, and Granny.  This time around, the  unsuspecting Beinecke family has been added including parents Mal & Alice and son, Lucas.

The show is very reminiscent of the original television series you may have seen.
The plot revolves around Wednesday who has fallen in love with Lucas, a normal" boy.  A dinner at the Addams House is planned where the families will meet for the first time.  Wednesday confides in her father Gomez, that in fact, she and Lucas are already engaged.  Gomez must hide the information from his wife Morticia.  The dinner ensues with much hilarity and fun for the audience.

Auditions will include singing (16 to 24 measures please), reading from the script, and dancing.  Prospective cast members should attend either audition date but not both.

For more information, check out www.putnamcountyplayhouse.com.   We hope to see you at auditions this summer!  The Addams Family is sponsored by First National Bank.

Posted by Putnam County Playhouse at 7:35 AM 0 comments

Open House and Opening Week of Curtains The Musical! 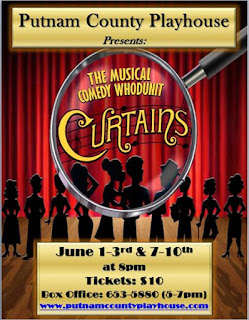 Putnam County Playhouse opens the 2017 season with the musical comedy, “Curtains.”    The show will run June 1, 2, 3 and June 7, 8, 9, and 10.   Tickets are available beginning May 28 from 2 – 3 p.m. at the Playhouse Box Office during their Open House.  The Cast of Curtains will present musical numbers from the show during the Annual Open House and refreshments will be served.

Tickets for all four shows of the 2017 season will be available beginning Sunday, May 28.  The Box Office is open the weeks of performances or you may call 765-653-5880 from 5 p.m. – 7 p.m.
Curtains is a musical mystery comedy set in 1959 at the Colonial Theatre in Boston, where a new musical called "Robbin' Hood!", a western version of Robin Hood, is being produced.   Playhouse favorite and veteran actress, Karen Temple plays faded film star diva Jessica Cranshaw who takes on the role of Madame Marian in “Robbin’ Hood.”  When Jessica is murdered during the show’s finale, all of the cast & crew of “Robbin’ Hood” are suspects in her murder. 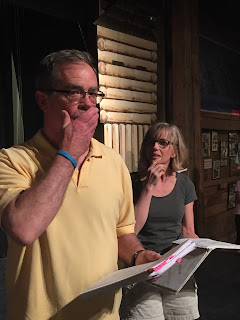 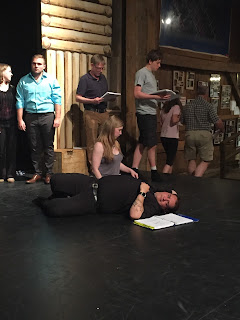 Curtains promises to be a fun, entertaining show that you won’t want to miss!   Call the Playhouse box office beginning Monday, May 29 to reserve your tickets.   Box office hours are 5 p.m. – 7 p.m. Monday – Saturday during show weeks.   The box office phone number is 765-653-5880.  Curtains is sponsored by Shuee’s. 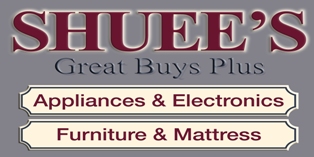 Posted by Putnam County Playhouse at 8:52 AM 0 comments

AUDITIONS FOR "THE FOREIGNER" COMING UP!!!

The second show of our "Season of Laughs" is the Larry Shue comedy The Foreigner. It will be produced July 13-15 and July 19-22.  Director Jim Green will have two sessions of auditions for all roles in the show. The first session will be Sunday, May 14 at 3 p.m. to be followed by a second session on Monday, May 15, at 7 p.m. Both sessions will be held in the Rehearsal Center at the Hazel Day Longden Theatre.

The Foreigner is being sponsored by:

The Foreigner tells the story of Charlie Baker (stage age 20's - 40's), a broken-hearted Englishman who wants to take a vacation and get his life together. His friend Froggy Le Sueur (stage age 30's - 40's) - also an Englishman - recommends the Georgia fishing lodge of his good friend Betty (stage age 40's-50's). English accents are required for Charlie and Froggy.

When Charlie decides he doesn't want to be bothered by the locals, he takes Froggy's advice and pretends that he can't speak English.  Everyone around him reveals secrets thinking that he can't understand what they are saying. The hilarious consequences of his charade turn everything upside down.

Roles including Charley, Froggy, Bette, are all open.  Other open roles include the local minister David Marshall Lee, his fiance Catherine Sims, and Ellard Sims, her brother.  Also along for the fun is Owen Musser a local do-gooder who is actually the leader of group of rabble rousers.   The stage ages for all of these roles is 20's to 40's, with the exception of Ellard who is late teens early 20's.

Auditions will consist of readings from the script.  More information can be found under the Current Season drop down at the top of the page on the website!