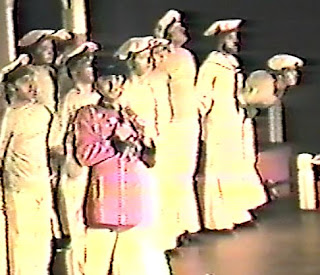 From our July, 1985, production of Gilbert & Sullivan's HMS Pinafore.
The production was directed by Jim Poor with choreography by Jack Randall Earles and musical direction by Geoff Price.

Troy Wilson was featured as Captain Corcoran.  Also starring in this young people's production were John C. Baughman, Jr, as Sir Joseph Porter, Cathy Barr as Buttercup, David Brown as Ralph, Bert Brown as Dick, and Sharon Carlson as Josephine.
This is the only PCPH production of a Gilbert & Sullivan show, so far.
To read a program from the show - click HERE.