Little Shop of Horrors was first a low-budget film directed by Roger Corman in 1960. The musical version was first performed Off-Broadway in 1982. It was created by Howard Ashman and Alan Menken, the team later responsible for Disney’s The Little Mermaid. A film version of the musical was released in 1986, and it was most recently revived on Broadway in 2003. 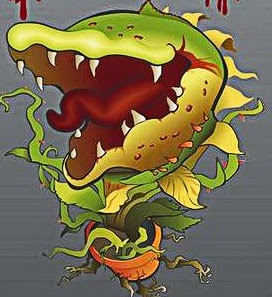 Sponsors for the musical are Shuee & Sons and Eitel’s Flowers &
Gifts.

Leading the cast is Dustin Bond as Seymour Krelborn, an assistant in a Skid Row Flower Shop. He is in love with Audrey, played by Meghan Armitage. Taking the role of the shop owner, Mr. Mushnik, is David Roberts.

When Seymour discovers a unique plant, his life changes forever. He has no idea that Audrey II wants to take over the world one city at a time, and it includes Seymour in its plan.

A trio of neighborhood urchins comment on the proceedings in songs reminiscent of those sung by 60’s girl groups. The trio are Ashlee Anne Vitz (Ronnette), Hannah Brattain (Chiffon), and Mira Hoffman (Crystal).

Audrey’s boyfriend, dentist Orin Scrivello, is played by Jacob Peterman. Featured in several roles is Cameron Callan. The voice of Audrey II, the extraterrestrial plant, will be done by Dale Grove.

Costumes are by Caroline Good. Running the sound/light board is Elise Merrell. The plant puppets are animated by Elijah Brattain.


Posted by Putnam County Playhouse at 11:27 AM