Get to Know "The Game's Afoot" Playwright: Ken Ludwig 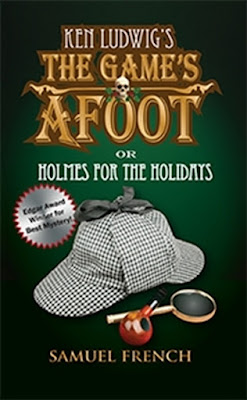 Closing our season will be the mystery-comedy The Game's Afoot or: Holmes for the Holidays.

The show is being sponsored by Shuee's Furniture and Mattress.

The play was written by popular award-winning playwright Ken Ludwig.

Ludwig is an internationally-acclaimed playwright whose work has been performed in more than 30 countries in over 20 languages. He has had 6 shows on Broadway and 6 in the West End. He has won two Laurence Olivier Awards, England’s highest theatre honor. He has also received three Tony Award nominations and won two Helen Hayes Awards, the Edgar Award, the SETC Distinguished Career Award, and the Edwin Forrest Award for Services to the Theatre.

His plays have been commissioned by the Royal Shakespeare Company and the Bristol Old Vic. His best known plays and musicals include Lend Me A Tenor, Crazy For You, Moon Over Buffalo, Leading Ladies, Twentieth Century, The Adventures of Tom Sawyer, The Game’s Afoot, The Fox on the Fairway, Midsummer/Jersey, The Three Musketeers, Treasure Island and The Beaux’ Stratagem.

Ken's new book How To Teach Your Children Shakespeare was published in June 2013 by Random House, and his work has been published by the Yale Review. He has degrees from Harvard, where he studied music with Leonard Bernstein, Haverford College and Cambridge University.


Posted by Putnam County Playhouse at 11:36 AM