Shakespeared! The Taming of the Shrew

For its 10th annual performance, “Shakespeared!” Youth Theatre Workshop will present The Taming of the Shrew on Friday, June 23rd at 7:00pm in the Hazel Day Longden Theatre of the Putnam County Playhouse.  Tickets are $3 for teens/adults (12 and under are free) and will be available at the door.  This year’s workshop is once again sponsored by Shuee Furniture & Mattress and a grant from Arts Illiana. 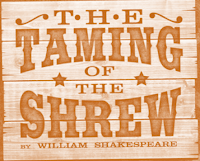 The entire “Shakespeared!” experience is designed to challenge the young player and to demystify the bard’s lively text in a fun and engaging way, empowering them with ownership of it.   In addition to interacting with Shakespeare’s text and learning the play, the kids will have the opportunity to directly apply instruction in acting technique, movement, voice, improvisation, comedic timing, character development, and subtext.
Posted by Putnam County Playhouse at 9:40 AM