Auditions for the Final Show of the 2017 Season! 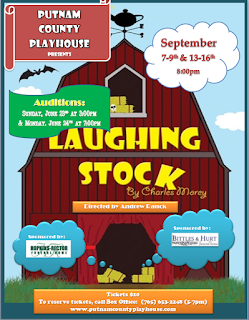 Director Andrew Ranck will host 2 nights of auditions for Laughingstock, the final production of the 2017 Putnam County Playhouse Season.   Auditions will be held Sunday, July 23 at 3 p.m. and Monday, July 24 at 7 p.m. in the Rehearsal Center at the theater.

This is Andrew's third year out at PCPH and His second show directing with us, last year he directed The Odd Couple (Female Version).   Andrew is the Director of Putnam County Comprehensive Services.   He was last seen in Curtains the Musical, playing Christopher Belling.

Andrew describes the show like this: “Murphy’s Law could be a replacement title for this fun romp that tells the tale of a summer theatre troupe that performs their repertory season in an old converted barn (Sound familiar???) with hilarious outcomes.

Everyone person in theatre has a tale of something that went wrong in a production, so imagine if all of these things happened at ONCE!  That is Laughingstock.  While the show is funny and the disasters come one right after another, the true heart of this show is summed up by all those involved: “We wouldn’t trade it for anything.”  Come join us for the 4th and final show of the season at the Playhouse.”

The cast of Laughingstock includes 5 women and 7 men in a wide range of ages from teens to 70’s.   For more information about the show and character descriptions, please go to the website at www.PutnamCountyPlayhouse.com.  Those auditioning should be prepared to read from the script.
Posted by Putnam County Playhouse at 1:21 PM