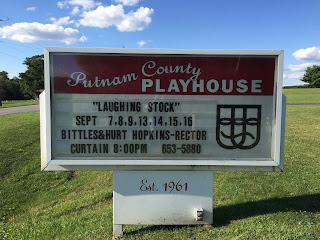 Murphy’s Law could be a replacement title for this fun romp that tells the tale of a summer theatre troupe that performs their repertory season in an old converted barn (Sound Familiar???) with hilarious outcomes.  All of the characters necessary to lampoon the art of theatre are here:  invisible producers that really run the show, wacky directors that think rehearsals just get in the way of true performances, a tottering older couple who know nothing more than their lives in the theatre, the spaced out actress, a “serious” actor who must find motivation for every possible movement on stage, an artistic director who writes his own scripts to save on royalties,  and even a drunken stage manager holding it all together by a very loose thread.  Mix these misfits in with a season that includes the plays Hamlet, Dracula, and Charley’s Aunt and you have a delicious and hilarious recipe for disaster.

Everyone person in theatre has a tale of something that went wrong in a production, so imagine if all of these things happened at ONCE!  That is Laughing Stock.  While the show is funny and the disasters come one right after another, the true heart of this show is summed up by all those involved: “We wouldn’t trade it for anything.” 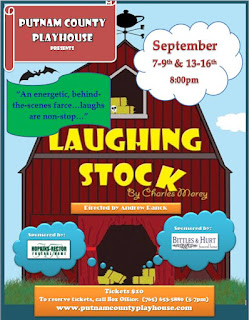 Come join us for the 4th and final show of the season at the Playhouse. You’ll laugh and you may also gain a little insight into why we do what do!
Posted by Putnam County Playhouse at 8:56 AM