THIS PRODUCTION HAS ENDED ITS RUN


PCPH board member Caroline Good is starring in a production of Tennessee Williams' famous play The Glass Menagerie at Wabash College this weekend.  She plays the demanding role of Amanda Wingfield, a part Williams based on his own mother.

The other cast members are Austin Ridley as Tom, Betsy Swift as Laura, and Louis Sinn as Jim, the gentleman caller.

The Glass Menagerie is being directed by Professor Jessie Mills.


Caroline was seen in three productions at PCPH last season: Curtains, The Addams Family, and Laughing Stock. She is directing this season's opener, the musical Annie.


PCPH has produced The Glass Menagerie twice.  In 1985, it was directed by Jim Poor. The cast included Emily Poor as Amanda, Marc R. Adams as Tom, Brian Williams as Jim, and Beth Hennon as Laura. 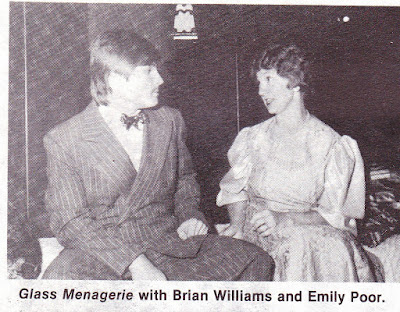 Director Larry Sutton presented his production in 2003.  His cast included Bethany Bax as Amanda, TJ Tincher as Jim, and Allison Larty as Laura. Keith Bodnarick and Zachary Spicer shared the part of Tom at different ages of his life. 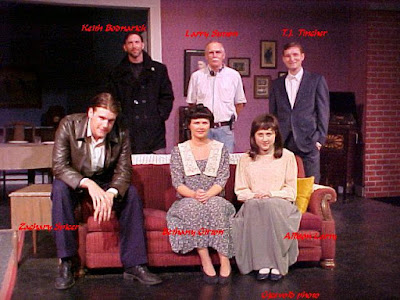 The Glass Menagerie is a classic American play that should be seen by every student interested in theater.  Don't miss this opportunity to see an innovative production.  And congratulations and "break a leg" to Caroline!


Posted by Putnam County Playhouse at 10:18 AM