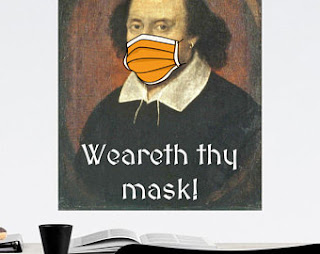 When Putnam County Playhouse found it necessary to cancel its 2020 onstage season, a lot of local thespians were left without an outlet for their talents.  When it finally became clear in July that the Hazel Day Longden Theatre would see NO activity during the summer [for the first time since it opened in 1983], a few of them took matters into their own hands and decided to honor theatre, Shakespeare, and the arts.  They got together [wearing masks and practicing social distancing] to produce their own SHAKESPEARE AL FRESCO production of the Bard's A Midsummer Night's Dream.
And now you can see the result of their hard work.
Live theatre returns to Putnam County for two evenings, when these acolytes of the Bard bring their version of Shakespeare’s comedy A Midsummer Night’s Dream to the Robe-Ann Park facility. Performances will be September 25 and 26 at 7 p.m.  Admission is free.

The production is sponsored by Bittles & Hurt and Hopkins-Rector Funeral Home.

Click HERE to read about our sponsor.
Special consideration was also provided by the Greencastle Parks Department and Andrew Ranck.

Attendance is limited by state mandates to 250 persons. The organizers ask that those planning to attend practice social distancing and wear masks for the safety of everyone.  Audience members can bring a blanket or lawn chairs for seating.

The production is a condensed modern version of the classic that was adapted by Caroline Good who also serves as co-director along with Shelly McFadden [they have blocked the production to keep the actors at the proper distance from each other - some photos for this story were staged briefly without masks].  Assistant directors are Andrew Ranck and Beth Bax.  Technical director is Dustin Bond. The light operator is Grace Elmore and the sound operator is Fiona Good. Props master is Noah Pettit.

Confusion reigns when the magical Oberon (Joshua Saul Bain) and his wife Titania (Ashlee Anne Vitz) decide to use their mystical powers to confuse and confound the mortals.  They are helped in their endeavors by Puck (Andrew Ranck) and his cohorts Peaseblossom (Alice Howard), Cobweb (Karen Temple), Moonshine (Beth Bax), the Changeling Boy (Mike Henry) and Moth (Suzanne Funk) and Mustardseed (Ellie Henry).

Among those who find themselves enchanted are a group of craftsmen who are hired to make sure all goes well at the wedding including Bottom (Ric McFadden), Flute (Jay Prewitt), Quince (Alisa Isaacs-Bailey), Snout (Eleanor Howard), and Snug (Tim Good).

Others involved in the antics are Helena (Michaela Semak),  Philostrate (S. McFadden), and Hermia’s father Egeus (Bond).
Costumes and settings were designed by the cast and staff.
"The eye of man hath not heard, the ear of man
hath not seen, man’s hand is not able to taste, his
tongue to conceive, nor his heart to report what my
dream was." Nick Bottom.

A Midsummer Night’s Dream is a Putnam County Playhouse Project.