"Send Me No Flowers" Cast Announced! 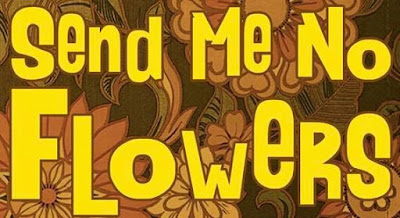 Director TJ Tincher has chosen his cast for the July comedy at Putnam County Playhouse. Following the theme of Love Conquers All, it will be produced July 11-13 & July 17-20.  Season tickets are on sale now, and individual tickets for this show and all others will go on sale at the annual PCPH Open House at 2 p.m. on June 2.

TJ directed last season's hit The Mousetrap. He has appeared in many PCPH productions including Once Upon a Mattress, Pippin, and The Bad Seed. He won the Upstage Award for his role in Thoroughly Modern Millie. Assistant Director Mike Mitchell has also appeared onstage at PCPH in shows such as On Borrowed Time, Pippin, and The Nerd.

Corporate Sponsor for the production is:

The cast and staff gathered for the first read thru of the script on Thursday, May 9.

The leading role of George Kimball will be played by Scott Armitage. He has appeared onstage at PCPH in many roles in musicals and comedies. Scott played Nathan Detroit in our latest production of Guys & Dolls. He won an Upstage Award for his role in Don't Drink the Water.

The distaff lead will be played by Ashlee Anne Vitz. She is Judy Kimball who has to deal with her husband's hypochondria and suspected stepping out!  Bryan Schroeder is playing Bert Power a college friend of the couple who is caught in the middle of Judy's insecurities and George's wacky plot to marry off his soon to be widowed (he thinks) wife.

Ashlee came to PCPH as Queen Guinevere in Camelot, and has appeared in leading roles in shows that include Guys & Dolls (opposite Scott), The Bad Seed, and Angel Street. Bryan has worked on tech for many shows and received an Upstage Award for his work in South Pacific.


Noah D. Pettit and Cameron Wunderlich also appear. Noah is playing the swinging delivery boy Vito and Cameron is the more serious Dr. Morrisey. Both have worked on numerous shows at PCPH. Cameron won the Upstage Award for his performance in The Foreigner. They are both currently working in She Loves Me, our season opener.


Among those making their PCPH debuts are Sam Draper who plays neighbor, Arnold Nash.  His wife Jessie Draper is playing Passberby Number One who appears in George's fantasy.

Also making a debut is Mitra Flott who appears as George's fantasy girlfriend.

Three cast members from Little Women, The Musical are together again in Send Me No Flowers. Michaela Semak who played Beth is here in the role of Miss Mason, a misunderstood working girl. Eleanor Howard who played Aunt March is Passerby Number Two.  Jack Randall Earles who was Mr. Laurence plays Mr. Akins, a determined cemetery plot salesman.


Eleanor has appeared in Curtains, See How They Run, and Angel Street among many productions. Michaela has also appeared in several productions including Guys & Dolls. Jack Randall, who is also a board liaison for the show, appeared last season in Annie and The Mousetrap. He is a four-time Upstage Award Winner.


Sandi Rossok is also a board liaison to the show and Linda Gjesvold designed the set. Schroeder also serves as technical director for the production.