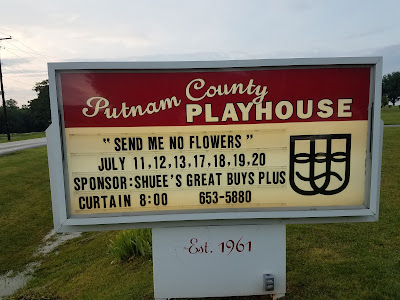 "SEND ME NO FLOWERS" ENDED ITS RUN ON SATURDAY, JULY 20.

THANKS TO OUR GREAT AUDIENCES!

The production is sponsored by Shuee’s Great Buys Plus.

Send Me No Flowers is directed by TJ Tincher. Board liaison is Sandi Rossok. The comedy by Norman Barasch and Carroll Moore was last produced at PCPH in 1973.

The play was on Broadway briefly in 1962 and was the basis of a popular film comedy starring Doris Day and Rock Hudson in 1964.

TJ directed last season's hit mystery The Mousetrap.  He was last seen onstage at PCPH in the title role of The Foreigner in 2017. TJ has appeared in roles in many shows including Pippin, On Borrowed Time, and Laughing Stock.

Scott Armitage has the leading role of George Kimball, a hypochondriac who spends most of his time thinking he is sick.  His long-suffering wife, Judy, is played by Samantha Flannelly.
When George overhears Dr. Morrissey (Cameron Wunderlich) discussing another case, he immediately concludes that he himself has only a few weeks left to live.

Scott has appeared in many roles at PCPH.  Among his favorites are Charles Thompson in 1776, Nathan Detroit in Guys & Dolls, and Walter Hollander in Don't Drink the Water.

Samantha appeared at PCPH most recently in The Foreigner and also played the leading role of Jo in the musical Little Women.

Cameron played the leading role last season in The Mousetrap and won the Upstage Award for his performance as Ellard in The Foreigner in 2017.

His next door neighbor, Arnold Nash (Sam Draper), is pressed into service to help him keep his “condition” a secret.  George’s plans include setting up Judy with a new husband, an old college acquaintance, Bert Power (Bryan Schroeder) and keeping her out of the arms of a local young cad Vito (Noah D. Pettit). Pettit is also the production stage manager.

Sam is making his PCPH debut in this production.  Bryan has appeared in many shows including South Pacific and Death By Chocolate. He also directed the musical Bye Bye, Birdie here in 2014.  Bryan is also the technical director for the production and designed the lighting and sound. Noah appeared in She Loves Me last month as the clumsy busboy.

George also tries to set up his final arrangements with the help of a friendly burial plot salesman, Mr. Akins (Jack Randall Earles).  There are fantasy sequences in which the participants try to imagine their future circumstances.

Jack Randall is a long time board member at PCPH.  He appeared last season in Annie and The Mousetrap. He is also the director for the September season closer, Picnic.

Those playing roles in the dream moments are Eleanor Howard, Michaela Semak, and Dimitri Flott.

Dimitri is making a PCPH debut. Michaela has appeared in many shows here including Little Women and Annie. Eleanor made her PCPH debut in 2011 in The Music Man and has appeared in such shows as Guys & Dolls, Angel Street, and Curtains.

Set design is by Linda Gjesvold with costumes by Sarah Armitage Bond. Working on the stage crew is Grant Pettit. Darvëll Barger is running the sound board and Christopher Douglas is running the light board.

Posted by Putnam County Playhouse at 10:50 AM